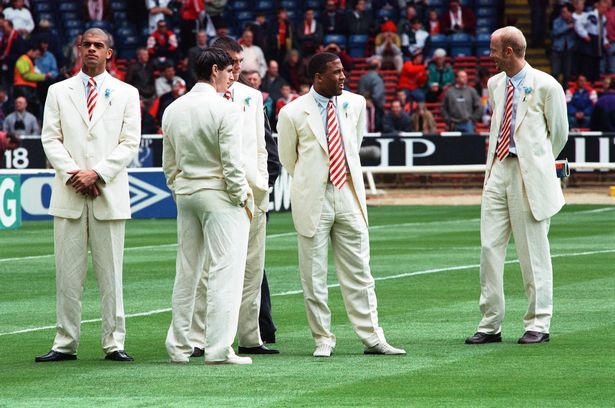 Thanks to Paul Hearne for the match report. I am a bit snowed under at the moment with various commitments, but will get back on track with Clubify (eg sending out weekly fixtures) next month. Enjoy the random pic of Liverpool's Spice Boys!

Thomastown U15 Boys started their league campaign last week with a disappointing 4-1 loss to Paulstown in United Park. The home side started brightly and were controlling the game for the first 10 minutes but without testing the keeper. Paulstown then scored with their first attack. With the Thomastown defense pushed up they were caught by the Paulstown danger man who gave goalkeeper Eoin King no chance one on one. Thomastown continued to play on the front foot with Alex Begley constantly probing and he put Frank Kavanagh in the clear only for the Paulstown keeper to save bravely. Then disaster struck when the home team’s defense lost possession and Paulstown struck for their second. Within two minutes it got even worse for Thomastown as the referee awarded a penalty to Paulstown who were as surprised as the home team to see it given! Even though Thomastown were 3 down after 20 minutes they didn't let their heads drop and pulled one back when Alex Begley played Finn Beck through and Finn made no mistake. When Frank Kavanagh was put through for the second time he beat the keeper but the ball rolled just wide of the post. Thomastown were pushing hard now and Liam Thompson saw his attempt from a Frank Kavanagh corner go agonisingly wide. Just before half time came the killer blow when Paulstown's main man claimed his hat trick. It was tough to take as the home team had played extremely well and found themselves 4-1 down at the break. After such an entertaining first half the second half never really took off. Thomastown pressed hard but never created any clear cut chances while the back four nullified the threat from Paulstown's attack. The home team can be proud off their performance with Liam Thompson and Alex Begley going well but man of the match goes to Adam Arthurs who was excellent throughout.