Fixtures + U14 Match Report on clinching the league 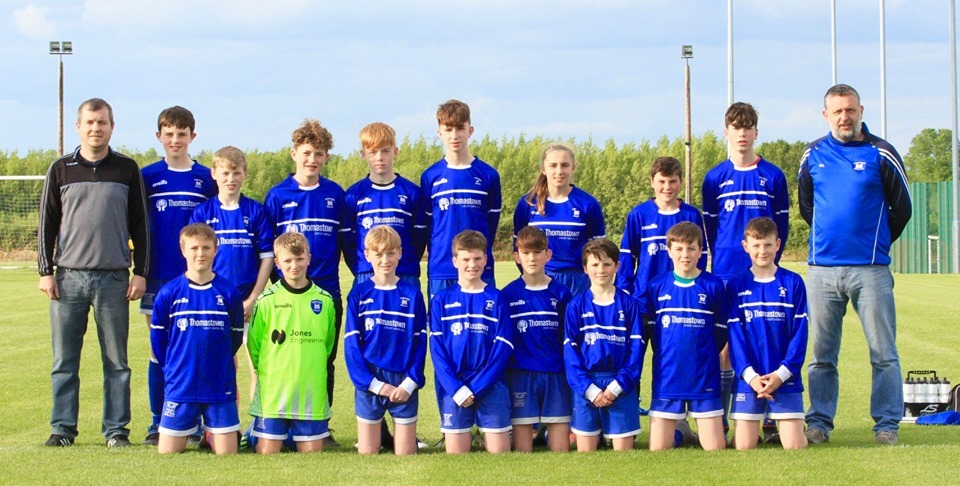 This weekend's fixtures (just four games) are now on Clubify. Well done to U14's on clinching the league, and thanks to John Lancashire for match report of the game that sealed the title:

Thomastown put on a stylish display in United Park to claim the Under 14s Bennettsbridge parts Division 1 title. In a game that Thomastown dominated from start to finish it was no surprise when town took the lead through the Darragh Coverdale. A mix up in the evergreen defence let the ball fall to the onrushing Darragh Coverdale who made no mistake from 14 yards out. Ellen Molloy was a constant thorn in this Evergreen side and only for a few over hit passes Town should be further ahead. Midway through the first half a lot of Thomastown nerves were eased when David Holden put Thomastown 2 nil to the good after some great pass and movement from Ellen Molloy Eanna O’ Keeffe and David Holden. Late on in the first half Ellen Molloy made it 3 nil with a screamer from 30 yards out. Thomastown 3 nil up at the break. Into the second half Evergreen came out stronger and with some great play forced the town keeper Sean Denieffe into his first save of the game. Evergreen were having their best spell of the game and soon Sean had to pull off another great save. 10 minutes had passed and Town broke down the left and quick one two between jimmy Maher and Rory Connellan resulting in the ball been crossed to the far post where the very impressive Eanna O’ Keefe to toe poke the ball home. 4 nil up. Eanna made it 5 nil shortly afterwards with a clinical finish. Thomastown made changes brining on Finn Beck and Conor Barcoe. Soon after with his first touch Conor Barcoe made it 6 nil following a great cross from Rory Connellan. Evergreen scored a late consolation late on to make it 6-1. Thomastown had fine performances throughout the pitch with Ellen Molloy and Eanna O’ Keeffe catching the eye. A huge congratulations to all the players and management team on an undefeated season.