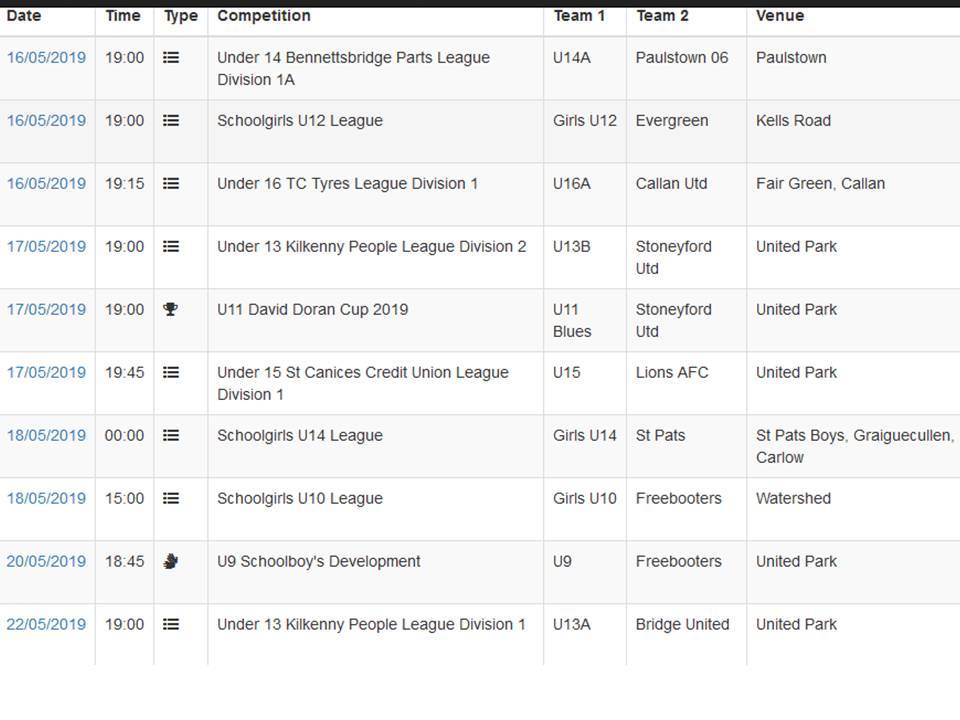 Plenty of weekday evening kick offs this week, as ever double check times with your manager (KDL website doesn't list a time for Girls U14 game on Saturday).

Thanks to Lacko for the match report below from the U14 game v Deen Celtic last Tuesday. Please send match reports to jerrygardner@eircom.net or text to 087 6637466.

Last Tuesday evening in the Princes Ground in Castlecomer two 100% records went by the wayside. Deen Celtic started the brighter of the teams and had a few long distance shots. 15 mins had elapsed when Thomastown conceded a free outside their own box. From the resulting free the Town keeper spilled the ball and a Deen Celtic forward was first to react to toe poke the ball home. One nil to Deen Celtic. Thomastown started to dictate the play without creating many chances. Jimmy Maher was a constant menace in the Celtic defense. On the one occasion in the first half that Thomastown got through, David Holden’s fine effort somehow crashed against the post and bounced to safety. Deen Celtic one up at the break.

Into the second half and Thomastown had the majority of the play. The ball was crossed into the Comer box and panic set in. It bounced around the box and eventually fell to David Holden who made no mistake from 12 yards out. Thomastown were moving the ball around and a Colm Treacy rasper brought the best from the Celtic keeper. Two minutes later the ref blew for full time, making it a point a piece for both teams. Best for Thomastown were Jimmy Maher, Darragh Coverdale and Aaron Hughes.