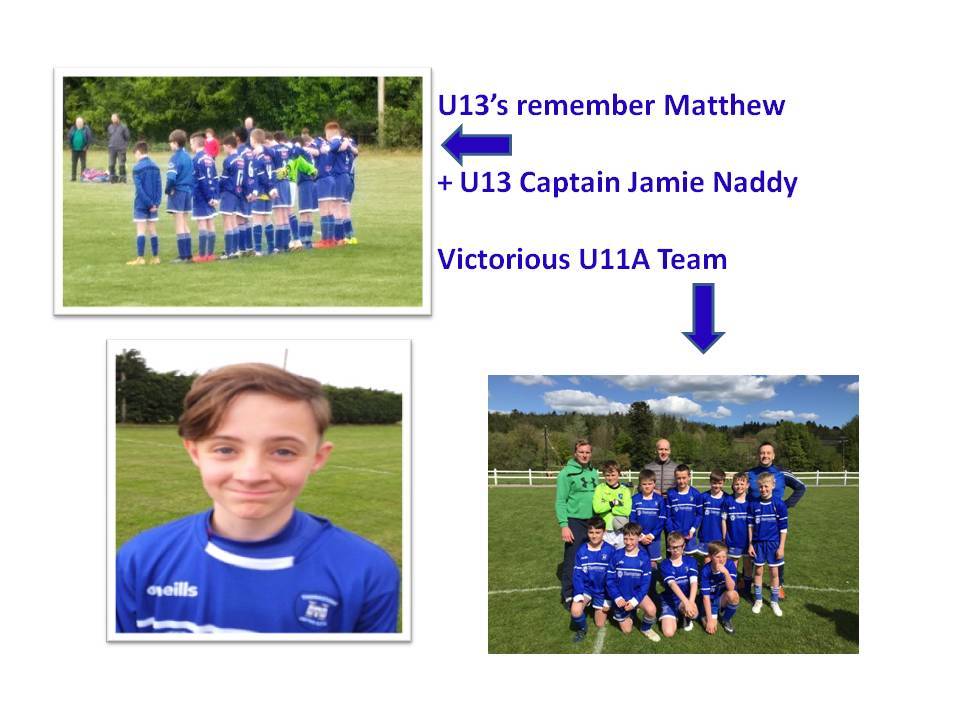 Thomastown Youths Match Report. We advanced to the Youths Cup Final after defeating Evergreen 2-1 on Saturday afternoon. After going one down. Joey Murray’s men battled hard and goals from Casper and Paddy Minogue put us into the final against Deen Celtic.

U14 Match Report Thomastown Athletic 3 Freebooters 1. On a Friday evening in United Park Thomastown put in a dogged display to record their 5th win in as many matches. From the start Thomastown were on the backfoot, and against the run of play the team went one up. A quick free kick from Aaron Hughes went out to the left to Rory Connellan, who took one touch and whipped in a vicious cross to the onrushing Sean Deniffe who toe poked it past the onrushing Booters’ keeper. Thomastown seemed to settle a bit better after that and were awarded a penalty after Jimmy Maher was brought down. Up stepped the ever impressive Ellen Molloy who calmly stroked the ball into the net sending the keeper the wrong way. Eaming Thomastown were two up at half time. Booters came out like men possessed in the 2nd half to pile the pressure on Thomastown, but the back line kept strong. Mid way through the second half Thomastown broke through and some great team play set up David Holden to slot home the 3rd goal. Booters scored late on to give Thomastown a last nervy few minutes but the players held their nerve to seal a great victory. Best for Thomastown were David Holden, Jack Kiely, Cormac Moore and Ellen Molloy.

U13A Match Report Thomastown United Under 13A team fulfilled a midweek fixture when they travelled to Durrow to take on league leaders Lions A.F.C, and came away with an excellent 2-0 victory. In a poignant display, thirteen brave young men in blue stood arm in arm and remembered their friend and school mate, Matthew Dunne, in a minute’s silence before kick-off.

With fire in their bellies from the first whistle, Thomastown hit the Lions defence hard and with less than two minutes played saw the Lions goalie pick the ball out of the back of the net after Colm Treacy took a shot on goal which forced the goalie to spill it over the line.

Thomastown continued to dominate all over the pitch, with the back four consisting of Conor Monks, Shane Simpson, Seán Denieffe and captain for the day Jamie Naddy in complete control and their line of defence impenetrable. With twenty minutes gone, Lions managed to get one past keeper Alex Begley from a free kick but it was ruled off side. Midfielders Cian Farrell, Albi Paul and Darragh Coverdale put in an outstanding performance throughout the match and were the driving force behind the Town’s attack. Thomastown’s attacking trio made up of Éanna O’Keeffe, Colm Treacy and Conor Kelly chased everything and never gave the Lions defence a moment’s peace. The first half ended one nil in the Town’s favour.

The same passion flowed in the second half, with no let up from Thomastown. With ten minutes gone, Colm Treacy scored an outrageous goal from well outside the box. Although victory was well in sight for the boys, they didn’t take their foot of the pedal. Like men possessed they continued to fight till the bitter end. In what was a tough week for the boys with the sudden passing of their friend Matthew, the boys showed maturity and spirit in their performance and have now set themselves up well for their next game against rivals Bridge Utd.

U11A Match Report Thomastown Athletic 8-0 Deen Celtic Boys in the U11 David Doran Cup. A fantastic all round team performance, with every player worked extremely hard. The result leaves us top of the group and into the Cup Knockout Round.

U11B Match Report Thomastown 1-2 East End. An outstanding performance from all players. There were two unlucky deflections against us for their two goals after our own Sean Grace broke our scoring drought with a cracker of a goal. The match featured another solid performance by Dion Cody at centre back and Noah on the right wing but topped by an outstanding performance from man of the match Eoghan Ryan. Manager Philly Begley added “I have to say this about one of players, namely Adam Tennyson, this young lad is the most improved player of our cup run, and he should be proud of himself - me and my management team are also so proud of the team how they performed in their first competitive cup game."