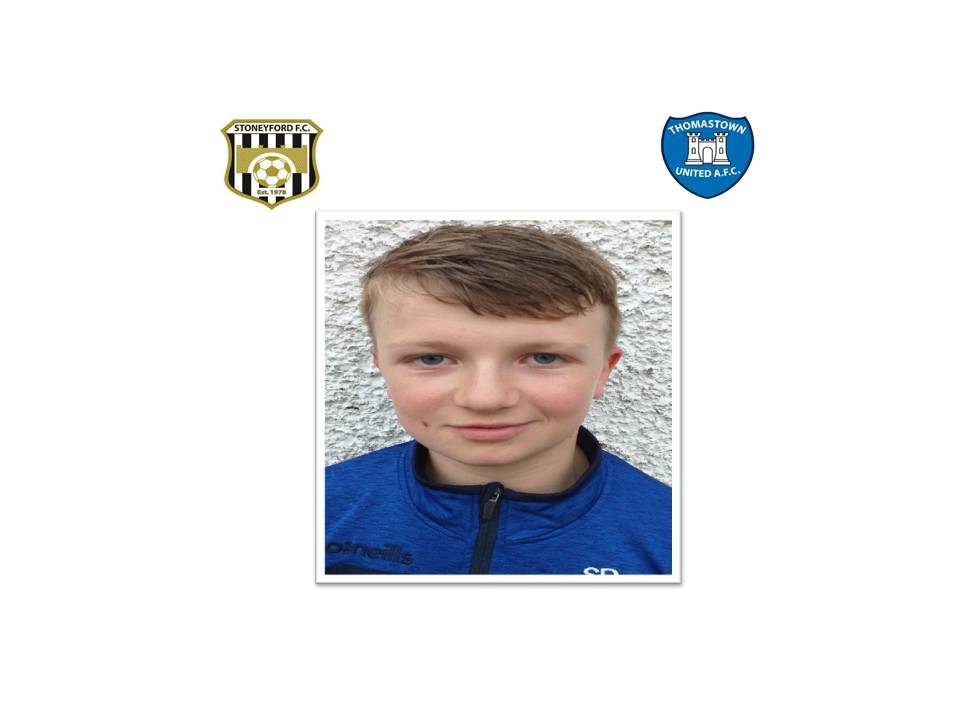 QUIZ NIGHT tonight in Tim's Bar at 9.00 pm - please support! Contact Mary Synnott on 086 0769880 if you can help with raffle prizes. FIXTURES: Another busy few days. As ever, please double check with your team manager - some information was missing from the KDSL website U13A match report follows: managers, please send your reports to jerrygardner@eircom.net.

MATCH REPORT: Thomastown United Under 13 A team travelled to Stoneyford on the evening of Wednesday 26th in the hope of getting back to winning ways after their last outing. With a slightly altered line up of Jamie Naddy playing in a defensive role instead of Darragh Dack and Finn Beck having his first start of the session spearheading the Town attack, the boys started well but unfortunately went one nil down after just 9 minutes when Stoneyford scored from a freekick just outside the box which left Alex Begley with no chance as the ball flew into the top corner.

This goal against the run of play spurred the boys to up their performance another gear and just 6 minutes later Thomastown equalised through a screamer of a shot from outside the area from mid fielder Cian Farrell. From here on in the boys dominated all over the pitch and just 2 minutes later, centre half Seán Denieffe scored a trade mark header from a superbly taken corner from Éanna O’ Keeffe. Thomastown went in at half time being 2-1 up.

The second half saw Thomastown’s dominance continue as they piled on the pressure on Stoneyford’s defence. With just 9 minutes gone in the second half, Finn Beck made a blistering run towards goal only to be brought down in the box for a penalty. Colm Treacy, unfortunately at this time was unable to convert it. Moments later, following on from a corner, Seán Denieffe hit the crossbar. Stoneyford’s defence was unable to clear the rebound resulting in Denieffe’s legs been taken from under him. Denieffe himself, reluctantly stood up to take the penalty but unfortunately the Thomastown penalty takers were not getting the rub of the green and the Stoneyford’s net minder managed to pull off a save. With the wind taken out of Thomastown, frustration began to crept in as they were by far the better team but eventually, they settled again when an incoming ball from another well taken corner was met by the head of Seán Denieffe. All the Stoneyford’s goalie could do was watch it sail past him into the back of the net. With certain victory for the boys, Thomastown made some substitutions bringing on Conor McCall and Oísin Farrell. Farrell, only on the pitch moments was brought to ground inside the area given Thomastown a third penalty of the game. With captain, Seán Denieffe on for a hat trick, he got the nod from the side-line to step up, this time he rattled the back of the net to give Thomastown a convincing 4-1 victory. Overall it was a great team performance with a deserved mention for Darragh Coverdale, Finn Beck and Jamie Naddy for their impressive individual performances. (Thanks to Jack Denieffe for the match report).