Under 13A match report Mon 1st April by Jack Denieffe 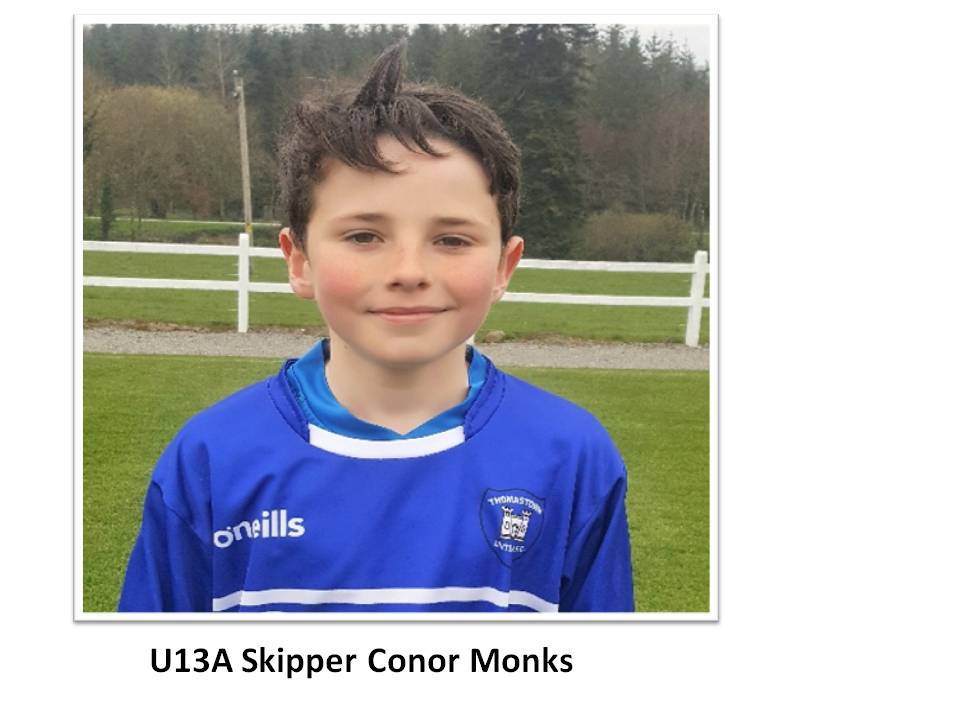 The boys in blue travelled to Deen Celtic with only one aim in mind and that was to bag all three points and they did it in style. Thomastown were magnificent throughout the pitch and not even a heavy downpour of hailstones could dampen their impressive five nil victory over Deen Celtic.

Both teams started with a high paced tempo and Deen Celtic were on an even keel with Thomastown for the first fifteen minutes but their threat was dampened with an outstanding save from keeper Alex Begley. His heroics spurred on his team mates to press even more and to play some fantastic football which resulted in centre midfielder Albi Paul scoring a cracker from outside the box putting the Town one up with ten minutes to half time.

With five minutes left on the clock to half time, Conor Monks (pictured) made a great run from his right back position up the wing, cutting in to the penalty area where he was inevitably brought down. Up stepped the cool-headed Colm Treacy to slot home a well taken penalty into the bottom right hand corner putting the boys a well-deserved two nil up at half time.

The second half brought much of the same with superb performances coming from the midfield trio consisting of goal scorer Albi Paul, Cian Farrell and Darragh Coverdale who had a man of the match performance with his work rate.

With five minutes gone on the clock, Albi Paul played a great ball to the ever-threatening Colm Tracey who from outside the box netted a cracking third goal for the Town. Just half way through the second half, Treacy completed his hat trick following on from some impressive football from Darragh Coverdale. Thomastown emptied their bench with the introduction of Jamie Naddy, Conor McCaull, Oísin Farrell and Finn Beck who contributed greatly to the overall team performance. With a minute to go Thomastown got their fifth from Oísin Farrell following from brilliant and unselfish play from his big brother Cian Farrell.

Overall it was a super squad performance with the back four made up of Conor Monks, Shane Simpson, Seán Denieffe and Darragh Dack working hard to deny Deen Celtic any chance of getting on the score sheet.